This week's trip to the Flip Side is a humorous - and visual - look at the many perceptions of sales people. We came across an image last week that represents how sales people are perceived by their friends, customers, and society as a whole as well as the way they see themselves versus what their job is really like. We also had our undercover sales advisor, “The Sales Guy” interpret the reality of the situation. Visuals are a great way to communicate subtle differences, and this will allow you to laugh as well as to gain some additional insight into the complex, multi-faceted world of being a sales account rep.

Without further ado, here is the picture: 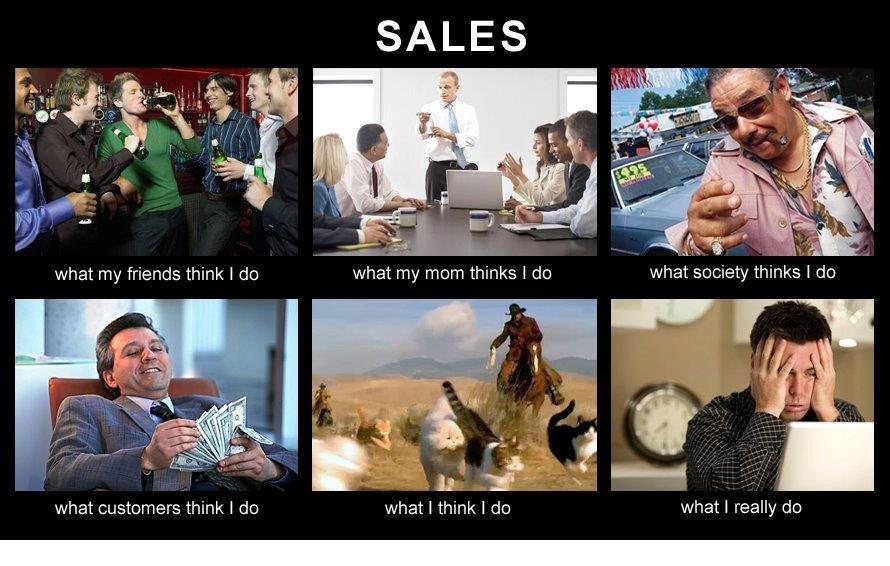 The sales person's friends and mom have the most optimistic perspective on a career in sales.

To his/her friends, sales is a constant party, hypothetically with someone else footing the bill. Ironically, what this probably means is that sales people often have to decline offers in their personal life because they have a client dinner or conference. Most procurement people have been to at least a few of both, and they never look like that first picture.

And good old Mom, she is convinced that all those years of reminding you to tuck in your shirt and mind your manners are finally paying off. Now you get to call meetings where people drink coffee and you point to them during the conversation.

Society as a whole and customers (procurement) think the least of sales people.

The used car salesman stereotype is so pervasive, that it is no wonder anyone manages to admit to their families what they do. But that image is no less forgiving than what a customer thinks of their sales rep. Whether the cash he is counting is his company's or his commission, he's laughing as he counts those bills - cash that he took from YOU.

The sales person's self impressions leave us with a less clear image.

Obviously, this sales person sees himself as a rugged cowboy, surviving on the edge and bravely herding... cats? The real question is, who are the cats? You might assume that they are customers or prospects, but from what we've learned in these many weeks on The Flip Side, sales people fight just as many battles within their own organization as they do outside of it. So those cats might be marketing, finance/accounting, even their own corporate leaders.

I was at a loss to explain the meaning behind the final image - what a sales person 'really' does. So I turned to The Sales Guy for help. Here is the explanation that he offered up (and no, that is not his picture):

In the final picture the sales guy is:
1.) Agonizing over his sales forecast
2.) Getting bad news from a customer on a deal
3.) Reading an internal email telling him of a serious customer issue
4.) Frustrated by his company's refusal to accept a customer's counter offer

Gone are the beer, the coffee, and the trusty steed - even the used car salesman had some jewelery. The final picture is a lonely one - certainly not an easy way to get to that stack of cash.

But the question remains, "What does sales look like to you?" Register or login to share your perceptions of sales people.

Tags:
Supplier Management The Sales Guy The Flip Side
The Underutilized Request for Information (RFI)
Blog Pick of the Week: Get that First Appointment

"What we've got here is a failure to communicate"

Are you a King or a Joker?