This week’s featured webinar, The Politics of Outsourcing Roundtable Webinar, was sponsored and hosted by the Outsourcing Institute on March 20th. You can listen to the webinar on demand here.

This event was conceived in response to Outsourcing Institute members who had concerns about political policy regarding outsourcing based on President Barack Obama’s 2012 State of the Union Address. One quote that was called out in the event overview was that it is time to "stop rewarding businesses for taking jobs out of the country and start rewarding them for bringing jobs back home." (Note: if you are interested in hearing the relevant portion of the State of the Union, listen to the Buyers Meeting Point Weekly Update for March 19th on Blog Talk Radio.)

The roundtable panelists represented a number of outsourcing models, and the event participants included members of the procurement and outsourced service provider communities. It is in the best interests of these panelists for the current political landscape regarding outsourcing and offshoring to remain unchanged.

In an effort to provide you with both sides of the outsourcing debate, Buyers Meeting Point invited a colleague, Patricia E. Moody, publisher of the Blue Heron Journal and author of 14 publications on manufacturing and supply chain management, to present an alternate viewpoint, one where some jobs and manufacturing not only can but should return to the U.S. (and have already).

First, a few helpful definitions and distinctions – the most important distinction to make is that outsourcing does not always mean offshoring. Outsourcing a process or a job may simply mean moving that operation or position to a payroll other than the company where it started.

“Change is a dragon. You can ignore it, which is futile. You can fight it, in which case you will lose. Or you can ride it.” (Anonymous) 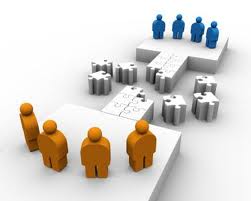 The panelists were in agreement with each other that the likelihood of the U.S. making a ‘U-turn’ with regard to how companies make use of offshoring as a fulfillment model is highly unlikely.

Those in the legislature that oppose offshoring want to take the U.S. back to a more economically protected time, but the business ‘escalator’ just keeps on moving – onward and upward. Any legislation that drafted strictly in response to a bad economy runs the risk of creating protectionist legislation to our own detriment. The focus instead should be on preparing our economy for future shifts.

As an example, Federal Bill HR 3596, The United States Call Center Worker and Consumer Protection Act, if passed, would “require a publicly available a list of all employers that relocate a call center overseas and to make such companies ineligible for Federal grants or guaranteed loans and to require disclosure of the physical location of business agents engaging in customer service communications.”

Outsourcing is not alone as we look at the dynamics that have changed local and global economies. Technology is another significant source of change, allowing a greater shifts in the global marketplace. Outsourcing takes the blame for many of the negative results change has brought about, such as job losses. Increased use of “the cloud” as a delivery model will start further changes by increasing connectivity, performance, and scalability on both sides.

Outsourcing providers are trying to mitigate the negative sigma of outsourcing, and many are working to increase local hiring and presence. There is a pervasive assumption that outsourcing means all jobs are leaving the U.S., but this does not need to be the case. Some states already offer financial/tax incentives to make it more appealing to keep jobs in the U.S.

The U.S. needs to be confident that we can handle the coming economic and technological changes, and that may mean offshoring needs to be an option for U.S. based companies. The ultimate goal should be for the U.S. to be the best country in the world to invest in, regardless of the changes and losses we have to adjust to.

Patricia Moody also viewed the webinar, and offered up the following thoughts. Buyers Meeting Point would like to thank Patricia for offering her perspective on this topic – especially considering our short events coverage turnaround window of only 48 hours!

Over 15% of US GNP goes to shipping stuff back and forth on planes and boats and trains, and keeping track of the whole tangled mess! Ten years ago on CNN I predicted the US would be making appliances, heavy equipment, other "stuff" right here in the US. Even my dog laughed at me!

15% of GNP is too much to spend on logistics, plus we need sophisticated IT systems, including data mining and analysis, risk management and optimization to manage the complexity.  As Toyota learned from the Aisin Seiki fire, and Honda learned from the WEK event detailed in Powered by Honda, and J & J learned from the Tylenol poisoning disruption, managing global supply chains has proved to be more difficult and more expensive than we thought when the outsourcing drive was very hot.

Now, we have companies in the US that are lean and enabled with excellent IT and workers to manufacture in North America.  I featured the Gloucester Engineering story, "Making it in Massachusetts" in Blue Heron Journal, and am working on two more. One is a small electronics firm in Michigan that is taking business away from China, growing fast, and the other is a company in Ohio.  There are more out there and they know that they want to be close to their customers, they can be extremely responsive, and they offer a "fair price," not necessarily lowest purchased price (minus logistics costs), but superb quality and a real hunger.

There are millions of dollars floating around us in this election year that will inevitably land in the "education reform" pile.  We believe that finding the right American workers is of course a bigger challenge than when offshoring began.  But as our research shows, the companies that need the workers are the best equipped to specify and conduct training.  This is not something the government is expert at doing, as we learned from the failed Competitiveness Initiative in the 1980s.

Although I too was suspicious of the re-shoring movement, I am convinced that we can bring 10 - 20% or more of what we outsourced 20 years ago to the Far East back to North America,  perhaps more if currency lows, China problems, global supply chain threats remain. We've spent these 20 years getting lean and very competitive in quality, there are, as my partner Dick Morley and I said in The Technology Machine, How Manufacturing Will Work in the Year 2020, some products that can be produced absolutely anywhere, so why not here?

I don't think we can bring everything back, but there are some products that should never have been outsourced in the first place and others that can be produced lower cost and more responsively by us local suppliers, near to customers, as in automotive, for example.

Tags:
Manufacturing Outsourcing Webinars
Blog Pick of the Week: To Pin or Not to Pin
Relationships help seal the deal

If you are interested in more current articles from Patricia Moody, you'll want to read, "He Who Laughs Last: The Return of U.S. Manufacturing" on the American Management Association site, published 28 March 2012:
http://www.amanet.org/shift/index.php/2012/03/28/he-who-laughs-last-the-return-of-u-s-manufacturing/

0 Cancel Reply
If you are interested in more current articles from Patricia Moody, you'll want to read, "He Who Laughs Last: The Return of U.S. Manufacturing" on the American Management Association site, published 28 March 2012: http://www.amanet.org/shift/index.php/2012/03/28/he-who-laughs-last-the-return-of-u-s-manufacturing/
Cancel Update Comment