The more complex societies get and the more complex the networks of interdependence within and beyond community and national borders get, the more people are forced in their own interests to find non-zero-sum solutions. That is, win–win solutions instead of win–lose solutions.... Because we find as our interdependence increases that, on the whole, we do better when other people do better as well — so we have to find ways that we can all win, we have to accommodate each other....

Applying proper motivational techniques can be much harder than it seems. Steven Kerr notes that when creating a reward system, it can be easy to reward A, while hoping for B, and in the process, reap harmful effects that can jeopardize your goals. 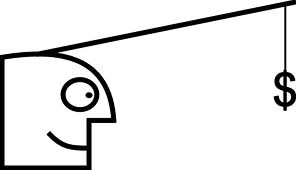 Tuesday morning I attended Supply & Demand Chain Exec’s webinar on Vested outsourcing. I will be sharing my full notes with you later in the week, but game theory emerged as a good Wiki-Wednesday topic. If you are interested in the idea of strategic and behavioral interactions between buyers and suppliers, I will also suggest reading more about behavioral economics and John Nash.

As the quote from former President Clinton above suggests, we are no longer working in an environment where one person can succeed at the expense of those he or she does business with. The interconnectedness of the economy and markets require that we work together to share the risk as well as the rewards.

The main speaker was Kate Vitasek from the University of Tennessee’s Center for Executive Education. She is also the Founder of Supply Chain Visions – a Top 10 Boutique Consulting firm specializing in Supply Chain Management and the author of a new book, Vested Outsourcing: Five Rules that will Transform Outsourcing.

The first of her top five rules is that our relationships with outsourced suppliers should be outcome based rather than transactional. We call our outsourced suppliers strategic but manage them (and their services) in a conventional transaction-based way. Buyers and supplier should be sitting on the same side of the table looking across at the business problem. Buyers and supplier need to have a strategy to get to a win-win result based on the economics of the contract.

This is where we make the connection back to game theory. If both parties understand the desired outcome, all incentives and therefore choices must be focused on that outcome. It is possible for the SLA’s in an outsourcing service provider’s contract to drive them towards higher speeds/throughput and lower costs without getting the buyer ay closer to the business objective the supplier was brought in to help achieve.

Suppliers have to have incentives to be more efficient, not just less expensive. That encourages them to eliminate waste and non-value added activities from their processes.

Let’s finish by taking a further look at incentive theory:

A reward, tangible or intangible, is presented after the occurrence of an action (i.e. behavior) with the intent to cause the behavior to occur again. This is done by associating positive meaning to the behavior. Studies show that if the person receives the reward immediately, the effect is greater, and decreases as duration lengthens. Repetitive action-reward combination can cause the action to become habit. Motivation comes from two sources: oneself, and other people. These two sources are called intrinsic motivation and extrinsic motivation, respectively.