“I cannot guarantee whether you will be successful after a well-prepared negotiation, but I can 100 percent guarantee failure or finding yourself outsmarted and in a concessionary position if you choose not to do a thorough prep prior to a negotiation.” (p. 38)

Mastering High Stakes Negotiations: Both Sides of the Table by Mark M. Bilgin, Ph. D. (BookLocker.com, 2017) is true to its title in that it lays out all of the considerations associated with the most critical, highest dollar value negotiations conducted. In an odd way, however, even meeting that high bar is still selling the book short.

If you are a people watcher, or a student of human behavior, you will absolutely love this book. I was immediately drawn in by the author’s use of case studies, both his own and the ‘outside’ experiences of others to illustrate in colorful but honest fashion the incentives and pitfalls associated with negotiation prep. Negotiation is, at its simplest level, the use of leverage, exchange, and (somewhat) predictable human behavior to bring parties together for their perceived benefit. As a result, you can not be a master negotiator without being aware of and interested in what people say and do. That may come as a great relief to anyone that still thinks negotiation is about aggressively dominating ‘them’ to get what is best for yourself at any cost. 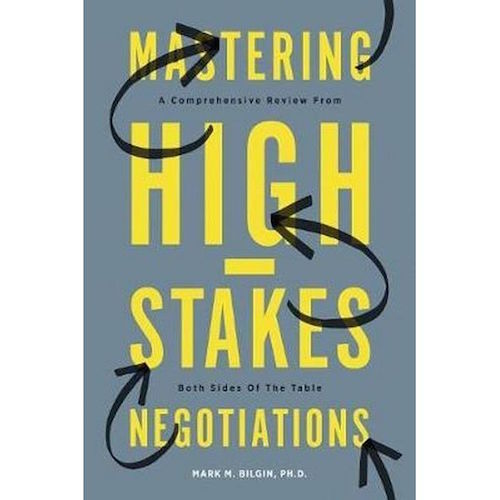 I was going to write that this is the not-to-be-missed section of the book, but I’d have to say it again about speech and silence (see below). In Chapter 1 there is a wonderful section about physically arranging teams for in-person negotiations, complete with illustrations. Who sits at the center? Where should the junior team members and interns be placed (hint: not near the center). This exercise of arranging seats by authority, responsibility, and knowledge seamlessly transitions into a mental exercise, one of power mapping the individuals on the other side of the table so that their reactions and comments are appropriately handled.

We’ve already taken a step in a traditional direction by focusing on in-person negotiations (although virtual ones are addressed in the book as well). Bilgin takes that a step further by pointing out that where in the world you conduct those in-person negotiations matters just as much. He shares his global experiences from working (and negotiating) in the oil industry in countries such as Saudi Arabia, Korea, China, and the UK. Of particular interest were his comments on individual v. ‘pack hunting’ in a negotiation. Some cultures are particularly effective at working as a group, and the teams negotiating with them must be prepared for these tactics, if not use them themselves.

Chapter 8 is entirely focused on the power of silence. Bilgin uses a perfect metaphor for the speech cycle of a negotiation, writing about how topics ‘sink’ or ‘float’ in the groups’ awareness. Depending on your position relative to each point, either sinking or floating might be a good thing, but managing the timing and trajectory of points is critical. Mastering the art of silence can best be observed when a negotiator manages to structure the conversation such that their desired focus point ‘floats’ and hangs in the middle of the air without interruption. This is a powerful moment, and not easy to achieve.

Less sophisticated students of the art of silence will appreciate the phrases on pages 93-94 for deftly avoiding commitment on a point. Sometimes, the pressure to speak is too great to resist, but this is not a reason to sub-optimally commit one’s self or organization just to get relief. Instead, be ready with a phrase that allows speech and signals non-commitment to the rest of the team.

The last piece of the speech/silence puzzle is refined listening skills, or “heightened listening” as Bilgin calls them. This requires unbroken awareness through sight and sound of everything going on in the negotiating sphere. Distractions are unacceptable, and the ROI of eliminating them can be significant in a large negotiation.

I will conclude my thoughts with a procurement-specific idea I came away with. How often does procurement bring in a dedicated professional negotiator? Not a category expert, not a management consultant, but someone who negotiates for a living. It would only pay off in the largest negotiations, but would be well worth the investment if the circumstances were right. There is both art and science to high stakes negotiation, and procurement simply does not get enough practice at this level to carry it all off when the pressure is on.