This week’s featured webinar was presented by Directworks, the new name for Co-eXprise, on the state of direct materials sourcing. If you have questions about the rebrand or the reasons behind it, you can read the press release here.

The event and slides can be accessed here.

The event was based on the results of several market research studies completed in early 2013. The studies included 252 sourcing VPs or Directors in manufacturing companies based in the U.S. but with global representation.

State of the Industry

The 2008 global recession put an emphasis on competition, and has driven manufacturers to look for new products to improve their new product introduction (or NPI) success rate. Because today’s buyers have come to expect better quality at a managed cost, engineering and procurement have had to coordinate to keep costs low starting in the design phase. The primary factors that have to be prioritized are: 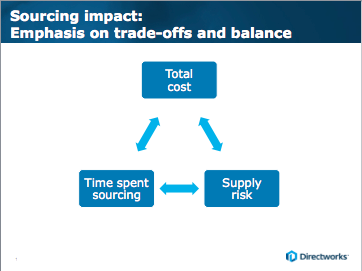 Total cost: Commodity volatility (particularly in base metals) is long-term and systemic, meaning that the goal is to manage the volatility rather than to achieve stability. In addition, the labor cost advantage of working with developing nations is eroding, and when this is combined with risk factors and supply chain disruptions, many companies are looking to nearshoring or reshoring as solutions. The extent to which procurement can increase their visibility into supplier costs increases their ability to manage the spend in the category efficiently.

Supply risk: Now that vertical integration has been replaced for the most part by outsourcing means that companies are more dependent than ever on their suppliers and supply chains. Risks like capacity, supplier capability, compliance and geopolitical are hard to quantify in advance but have significant impacts on production. Adding to the challenge of intangibility is the fact that reputational risk can be every bit as damaging as operational risk.

Time spent: Since few procurement groups are in a position to increase headcount to increase their spend under management, getting more out of the heads already in place is key. Many of the survey participants expressed concern that their teams were working below their paygrade, spending a disproportionate amount of time on non-strategic tasks. Although this may seem like a training issue, many leaders found that non-strategic work continued even after investing in capabilities and communicating the need to elevate the group’s focus.

Included in the recommendations resulting from the study were two interesting areas of focus: