The year 2020 witnessed a global Covid pandemic and the biggest GDP reduction since the Great Depression of 1929. Of course, Chemicals & Plastics (C&P) have also been affected globally, but there is no public data available yet for the year.

We will take a look at 2019 and 2024. Most experts are saying that 2021 will be a recovery year, and the International Monetary Fund (IMF) has made GDP forecasts by region.

In this article I will share global market data for C&P with regional details for installed capacity and operating rates, along with current (2019) and future (2024) demand and growth rates. The demand forecast presented here is aligned with the IMF data. You can also download the full article here:

This aggregated market analysis was executed on 147 C&P products totaling 3.6 billion MT (7.8 trillion lb.) of global products. These products represent US$2.5 trillion of revenue in 2019. According to Statista, this represents 44% of the global chemical industry, in other words, a good representation of total production.

There are thousands of chemical products on the market. However, the data from this market analysis are restricted to chemicals most consumed in the industry (solid, liquid, or gas) considered as commodity chemicals. They include Caustic Soda, Ethylene, Propylene, Methanol, Sulfuric Acid, among others.

It is important to point out that all regions had negative GDP growth in 2020. The IMF publishes twice-yearly historical reports and forecasts of GDP for 195 countries. I have aggregated the data from the latest publication (Oct. 2020) by region as shown below. 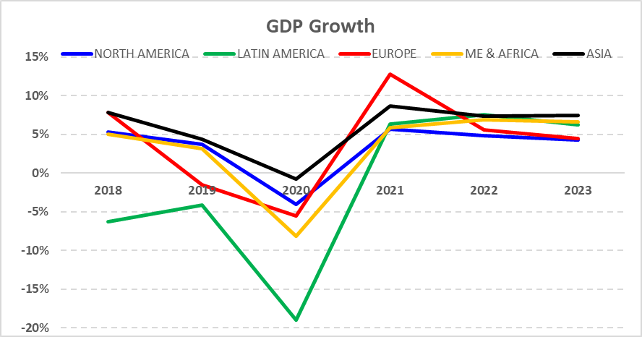 It appears that experts’ predictions of 2021 as the recovery year is aligned with IMF forecasts.

According to Trade Map, around US$ 1.2B of C&P (30% of total revenue) was traded between countries. I have aggregated this data by region as shown below. 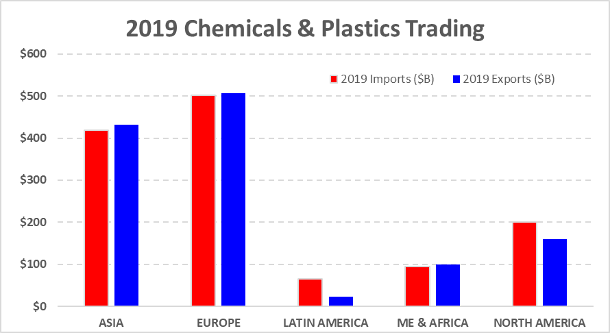 The data shows North and Latin America to be net buyers, while Europe, Asia, and MEA are net sellers.

The global 2019 capacity for all Chemicals was around 4.2 billion MT (2.5% higher than 2018), where Asia-Pacific represented the highest capacity (47%) among regions shown in Chart I.   The global capacity for all Plastics families was around 457 million MT (2.6% higher than 2018), where Asia-Pacific again represented the highest capacity (59%) of all regions together as shown below. Note especially the difference in the scale of magnitude. 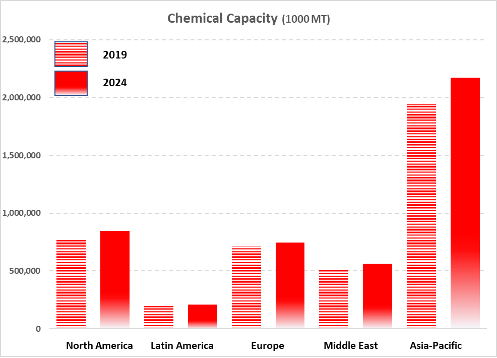 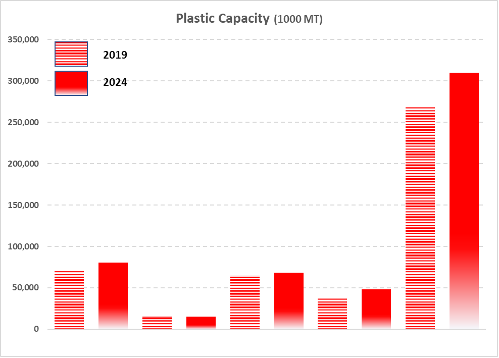 The high capacity, of course, means a high market demand in the region, but it also represents an alternative for purchasing officers to import from that region.

Some C&P capacities show higher concentrations in specific regions. Table A below shows, by region, which C&P have the highest concentrations of capacity (local capacity/global capacity). Having a higher capacity concentration may mean that the region has an abundance of – and likely lower costs for – that specific feedstock. It could also mean lower total unit fixed costs (manufacturing and expenses) because of higher production volumes. Consumers of these products should consider sourcing from these regions. The green cells in the table highlight dominance on a global basis.

Chart 2 below shows the aggregated operation rates for Chemicals and Plastics in each region as of 2019. 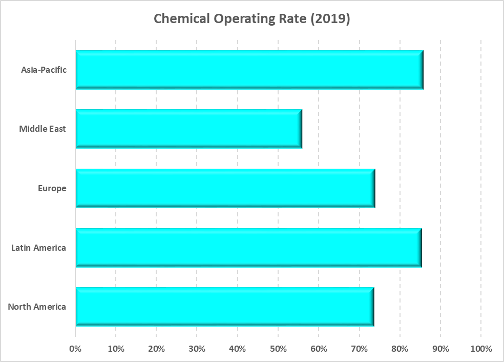 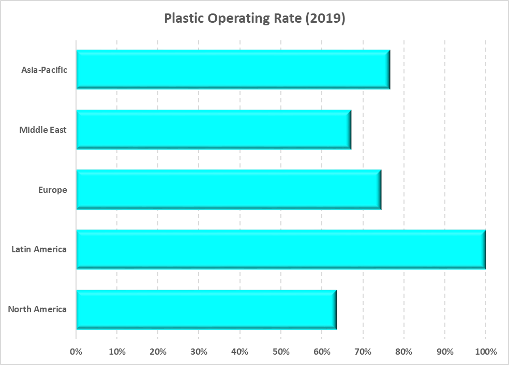 The analysis of operation rates can be considered from two perspectives: Unit Cost and Product Availability.

The second perspective is to see where there may be more products available to buy from. In this calculation, we need to consider the operating rates and installed capacities together. Table B shows both data sets by region.

Chart 3 shows the aggregated demand for Chemicals and Plastics in each region in 2019 and estimated for 2024. 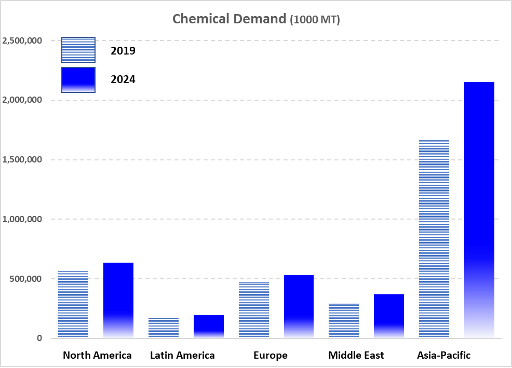 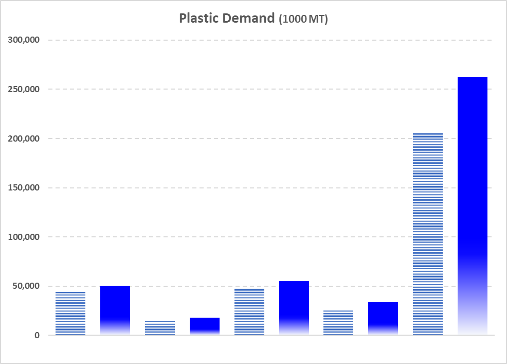 The graphs above look very similar, but the scales are 10-fold different. For Chemicals & Plastics, Asia-Pacific represents the highest demand in 2019 as well as for the future, followed by North America, Europe, the Middle East, and Latin America. This picture follows the same pattern as shown in Chart 1 – Capacity.

The Compound Average Growth Rate (CAGR) is the growth rate in percentage year over year for a specific region. It reflects the growth of all end-use applications of that specific C&P in a region; besides specific drivers, it is driven by the overall growth of the region’s GDP and GDP/Capita. 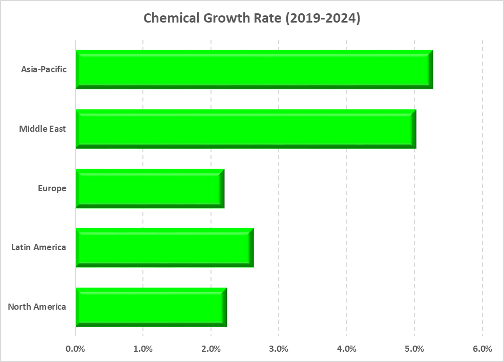 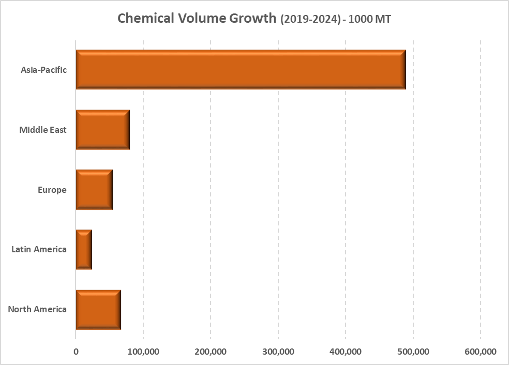 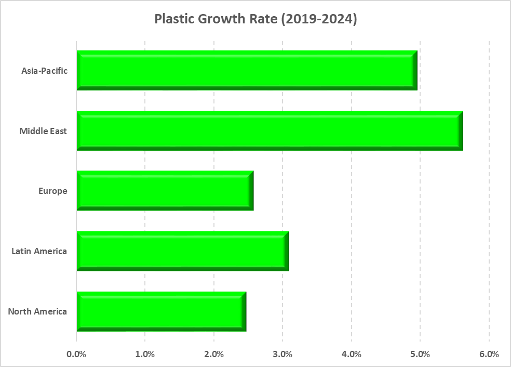 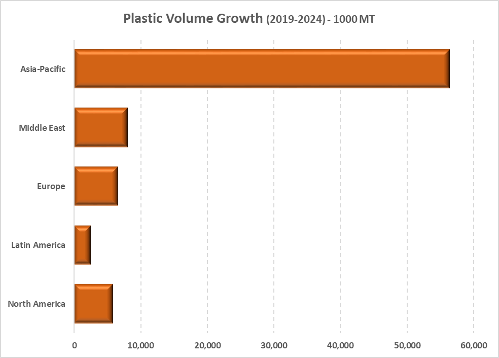 2020 was a terrible year, both for people and for businesses. As the above numbers show, Chemicals & Plastics will recover in 2021. C&P are used across all manufacturing industries as first- or second-tier materials, so it is important to understand market dynamics in the C&P world.  From the business perspective, it is imperative to understand the supply and demand of each C&P family and the competitive position in each region in order to define long-term business strategy.  From the purchasing perspective, managers need to educate themselves at a granular level on each C&P family they buy, so they can select the suppliers that best fit long-term needs, in addition to identifying opportunity for lower-cost materials.

Jan 25-29: Learning from and Preparing for Supply ...
Understanding Value Added Resellers in the Procure...

Paulo Moretti is Principal at PM2Consult.com, a boutique consulting company focused on excellence in the purchasing function for manufacturing industries and market analysis of Chemicals & Plastics industries.

Prior to becoming Principal, he was Senior Consultant at Vantage Partners, and worked 35 years at The Dow Chemical Company, where he developed experience across such diverse areas as Manufacturing, R&D, Sales, Marketing, Finance, Strategic Planning, e-Business, and Purchasing.

Chemical Prices Through Pandemic and War

Recommended Procurement Webinars July 6-10: A Post-COVID World, IT Collaboration, and a Summer Reset