How Procurement Saved the American Revolution As we prepare to celebrate the 4th of July in the United States, we have a lot to be grateful for. We are grateful for the simple things like peak of summer traditions: fireworks, grilling, and parades. We are also grateful that in the many years since the Declaration of Independence was signed our relationship with Britain has improved. We’d be awfully sorry not to be able to work with our British colleagues and partners.

All that being said, is the 4th of July a reason to be grateful for procurement? Absolutely. Procurement played more of a role in the American Revolutionary War than most people probably realize.

Generally speaking, the Colonies (as we were known back then) were a key point in the British commercial supply chain. The mercantile system was based on having colonies that would become exclusive trading partners. The Colonies sent materials such as fish, grain, and lumber to the West Indies in exchange for sugar, molasses, and rum, which were sent to Britain.1 Whether it was for materials made or grown in the Colonies, or the other markets we afforded them access to, there is no doubting that we were worth fighting for. When tensions started to rise because the British were exacting more in trade and taxes than the colonists felt they received in return, tensions hit a boiling point. And we think we have supply chain risk today… 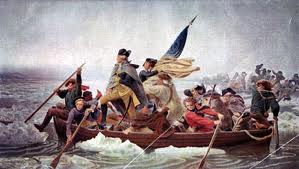 When it comes to the fighting itself, George Washington’s army only stood as long as he could procure enough supplies to feed, clothe, and house it. He barely managed to do so in the hard winter of 1776 but somehow came through. “He successfully procured supplies and dispatched men to recruit new members of the militia,which was successful in part due to British and Hessian mistreatment of New Jersey and Pennsylvania residents.”2 In other words, the British over-exercised their leverage and were no longer a trading partner of choice.

Revolutionary era procurement was also not without intrigue. With the odds often against him, Washington became more strategic in combating the British. “He had army procurement officers make false purchases of large quantities of supplies in places picked to convince the British that a sizable rebel force was massing. Washington even had fake military facilities built. In all this he managed to make the British believe that his three-thousand-man army outside Philadelphia was forty thousand strong.”3

Even all those years ago, Washington recognized the importance of procurement to an operation, as did his enemy. He leveraged the British Army’s expectations in order to mislead them about his troops’ size and location. If he had been a CEO, you can be sure that his CPO would not have had to fight for a seat at the executive table.

1. "The American Economy Prior to the Revolutionary War," HistoryCentral.com, Accessed on July 3 2014.